We see you Chris Clark! Featured on Impact TV's The Lonnie Hunter Show over the weekend.

Church Stars nominated Comedian K-Mack will be featured on Impact TV's "The Lonnie Hunter Variety Show". Let make sure and support our sister and watch!

Comedian Akintunde on Sister Circle June 21 where he talked about the Healthy Laughter tour, and his new comedy single "Please Stop Sleeping in Church" and more! Tickets are still available for the Savannah and Sumter tour stops. For tickets: healthylaughtercomedy.com #HealthyLaughter #UpNext #Milwaukee #Chicago

LAUGH AFTER LAUGH AT THE HP MUSIC & ARTS COMEDY SHOW

Looks like HP Music & Arts Father's Day Summer Sizzler Comedy Show featuring Danielle the Comedy Diva was hilarious!!! Shout out to producers Ernest and Laequinla Hunter in Chesapeake, Virginia for all they do in the Christian Arts! 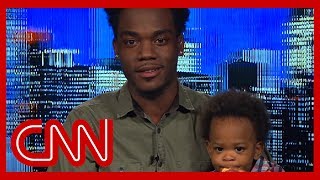 The viral video of Deztin Pryor, known as Dj Pryor, and his 19-month-old son was uploaded to Facebook by the baby's mother, Shanieke Pryor, and shows the pair engaged in a conversation. While the baby's words sound like gibberish, his father warmly encourages him in the conversion by responding as they talk back-and-forth. Pryor told CNN they were watching the season finale of “Empire” as the baby pointed his finger to the television screen and chatted away. The interaction h
<div class="gallery-item-container visible hover-animation-fade-in" id="pgi5e332abc19eb460017877d75_5" tabindex="-1" aria-label="ANOTHER SUCCESSFUL SCREENING FOR THE WAKE UP CALL" data-hash="5e332abc19eb460017877d75" data-id="5e332abc19eb460017877d75" data-idx="5" role="" data-hook="item-container" style="overflow-y:hidden;position:absolute;bottom:auto;ma