CHRIS CLARK LANDS ROLE IN "FOR MY MAN"

Church Stars own Playwright/Comedian Chris Clark is headed to television with a lead role in TvOne's new series "For My Man". When we caught up with Chris he was ecstatic and grateful to God for this awesome opportunity. Chris will play the part of "Brandon Daniels" in this true crime series that features shocking stories of women who have been arrested for a crime they did in the name of love. Chris Clark is the 2016 winner of Church Stars Comedian of the Year and 2017 winn

Church Stars was excited about this interview in part because it is Comedienne Tanya Lewis's debut as a playwright and director and we know it will be awesome! Church Stars caught up with Tanya and she shared her excitement about her debut stage play "TORN". She divulged to us that the story line is really about her life. She was inspired and given the title by God after penning the book "Restored", which discusses strongholds and other things He has delivered her from. In 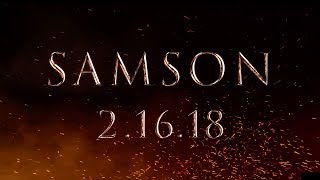 Popular faith-based production company Pure Flix Entertainment announced on Tuesday that it will be releasing the Bible epic "Samson" in theaters nationwide. Hitting the silver screen on Feb. 16, "Samson" will feature Billy Zane, Golden Globe winner Rutger Hauer, Jackson Rathbone, Lindsay Wagner, Caitlin Leahy and Taylor James as Samson. "'Samson' is based on the powerful, biblical epic of a champion chosen by God to deliver Israel. His supernatural strength and impulsive dec

Free My Dream Collection, brain-child of Producer Domenique Smith releases a new Fall Collection. The FMD Collection was inspired by a dream to encourage other #DreamChasers around the world. This is the first look at their influential t-shirts. #FreeMyDreams isn’t just a cool saying, it’s a movement to inform the world Don’t Just Dream. GO NOW TO www.FreeMyDreamEnt.com

Church Stars was delighted when Canadian Scholar and Playwright, Dr. Elaine Brown Spencer agreed to interview with us. We were intrigued by how God orchestrated the blending of two totally "different 'meeting of the mindsets" and jumped into the interview with both feet. CS: Welcome to the Church Stars Network Dr. Spencer. Tell us a little bit about your production and how you made the leap from Author to Playwright? EBS: Thank you, I really am excited and thank you for the i

HOME, THE FUTURE IS HEAVEN

OUR CONDOLENCES TO COMEDIAN TONY BAKER AND FAMILY

SHOW ME THE FATHER